The History of Women who play the Harmonica 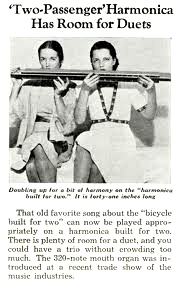 A researcher interested in the history of women who play harmonica will find very little in reference books or on the internet on this subject. In hundreds of books about blues, including several biographical dictionaries, there is no mention of any woman who played harmonica other than Big Mama Thornton and Memphis Minnie, who were famous because of their voices and Minnie's guitar more than their harmonica skills. There's very little else in blues tomes about women who play the mouth harp.

There was a time when the harmonica was very popular with both men and women. Starting in the 1920s, the harmonica was taught in public schools in America and many female students participated. The giant Hohner Company of Germany, world's largest manufacturer of harmonicas, sent experts to American schools to teach children how to play. They held contests and in 1924, more than ten thousand children participated.

A decade later, more than two thousand harmonica orchestras had formed. Over 150 existed in Chicago alone. In Los Angeles, 115,127 children were enrolled in the harmonica band program between 1927 and 1937. 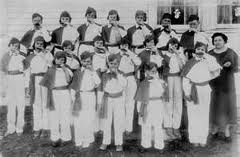 Most of the harmonica bands were organized by schools. The Sand Ridge Harmonica Band was a good example. It was organized by a teacher at Sand Ridge School, Tennessee in 1936. The band was invited to Memphis to play on radio station WMS in 1937. They held a reunion in 1991 with eleven original members attending. Since then they have regrouped and have performed at civic center, church and other social events. more

Professional harmonica players started appearing in vaudeville acts as early as 1927 when the Harmonica Rascals combined music and slapstick comedy to become immensely popular. Other bands soon followed their example. The Rascals, created by Borrah Minevitch, were like "the Three Stooges with mouth organs" and audiences loved them. Their act featured Johnny Puleo, a midget who played the largest harmonica available, the Polyphonia, for comic effect. The Harmonica Rascals were so successful that three separate bands by that name--each with its own midget--played in different regions of the country until the end of World War II. Besides appearing on vaudeville, the Harmonica Rascals had a weekly radio program, and appeared in nine movies between 1935 and 1943.

Other bands, inspired by the Harmonica Rascals, jumped on the band wagon. They included the Harmonica Scamps, The Harmonica Harlequins, whose members dressed in clown suits, and the Harmonicuties, an all-girl band boasting a female midget!    (more history of harmonica bands)

One of the first women to become popular playing the harmonica was Mary Travers who sang and also played violin, accordion, spoons and jaw harp. She became widely popular in French-speaking Canada as Madame Bolduc in the late 20s and 30s and made her first records in 1929. She was most likely the first woman to record on the harmonica.

One of the first women known to play blues harmonica was Minnie Wallace. She was a singer and the mother of blues singer Lucille Hegamin. She played in the Memphis Jug Band, but the harmonica on her few recordings was played by someone else. Very little is written about her in the blues history books.

During the mid 30s Tennessee folk singer and harmonica player Rebecca Tarwater made several recordings. And Cynthia Mae Carver performed on radio and recorded under the name, "Cousin Emmy," in the 1940s. 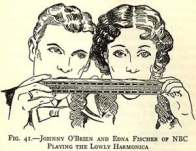 In 1950, John Brim recorded "Strange Man" featuring his wife Grace on vocals and harmonica. Grace Brim would become known as the "Queen of the Harmonica" and she made several recordings in the '50s with and without her husband.

In 1952, singer/guitarist Norman "Guitar Slim" Green recorded two songs with a woman identified only as "Turner" on harmonica. That same year Big Mama Thornton recorded "Hound Dog" for Peacock Records in Texas. She did not play

harmonica on the recording. The B-side was "They Call Me Big Mama." The record climbed to number one on the Billboard R&B charts, where it stayed for seven weeks and sold almost two million copies. Big Mama collected only about $500 for her big hit.

(note: this history is ongoing and incomplete. If you can add to this chronicle, please contact the webmaster)